Write a review
₹800.00
Tags:
DOES NOT BLACKEN ON WASHING OR ERODE. 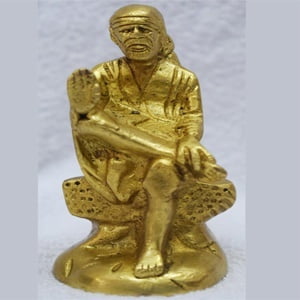 Thissai baba statue provides his devotees with every welfare he can bestow on them. Spread love, positivity, and happiness by getting and gifting this Brass Shirdi Sai Baba Idol to your loved ones and sai devotees for various special occasions to bring his presence into reality.

Brass Saibaba Statue is one of the famous deities in the present day who is worshipped mainly on Thursdays. Saint sai baba was a spiritual master and believed to be the incarnation of Lord Dattatreya (the combination of Lord Shiva, Vishnu, and Brahma). This brass Saibaba statue is hand crafted with beautiful intricate designs depicted.

This brass Sai baba statue provides his devotees with every welfare he can bestow on them. Spread love, positivity, and happiness by getting and gifting this brass sai baba idol to your loved ones and sai devotees for various special occasions to bring his presence into reality.

- One who performs this Puja ritual gets peace and prosperity.

- Sai Baba Puja is also conducted for the fulfilment of wishes.

- Worshippers get the blessings of Sai Baba.

- Performing this puja ritual is also beneficial for spiritual upliftment.

Sai Baba of Shirdi  is also known as Shirdi Sai Baba. He was an Indian spiritual master who is regarded as a saint and a fakir by his devotees. Sai baba is revered by both his Hindu and Muslim devotees during as well as after his lifetime. The origins of Sai baba is still unknown but as per some indication, he was born not far from Shirdi. His real is unknown but the name Sai was given to him by Mhalsapati (his disciple) when he arrived at Shirdi (a town of Maharashtra, India). The name Sai baba denotes a saintly father, holy father or a (venerable) poor old man. He took samadhi at Shirdi and after that this place known as Shree Samadhi Mandir or Shirdi Sai Baba Temple.

Does Sai Baba do miracles?
In the case of Sai baba, for example, he transformed a small village into a hub of education and health facilities. He brought water to some of the most water starved areas of the state, paying for it from his trust. All this is something that the state could never have achieved by itself.

Can we keep Baba statue at home?

According to Vastu Shastra, it is considered appropriate to place the idol and picture of any goddess and deity on the wall on the east or north side of the house of worship. Never face the idol or picture of God towards the north, otherwise, the worshiper will face towards the south.

How can I get blessings from Sai Baba?

Offering some coconuts to Sai Baba is said to invoke his blessings. Flowers: It is advisable to offer garlands to Sai Baba instead of loose flowers. Sweets: Just like us, Sai Baba also loves sweets. Offer him some today, preferably homemade, using cow milk.

Apart from the above mentioned uses there are many other uses and benefits of Baba brass statue which can be felt while using.

Visit our new website to get latest news in Tamil , English  & Hindi